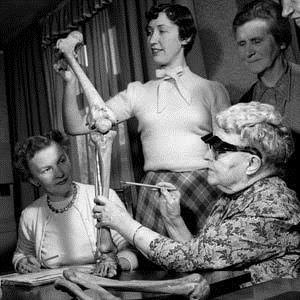 The Physical Culture movement was an exciting time; emerging in Germany, England and the United States during the 19th century and continuing through to the mid-20th century it was a true ‘melting-pot’ of health philosophy. The movement had an eclectic group of contributors and was the foundation for many modern athletic and health science disciplines. One especially eclectic contributor to the movement was Dr Bess Mensendieck (1866-1959).

Bess was a Dutch American whose beginnings in the Physical Culture movement were via the somatic practices used in the performing arts world at the time. Finding these practices too ‘metaphysical’ for her own tastes and also suspicious of the aesthetic ideals that were emerging with the ‘strongmen’ in the United States at the time; she became interested in the efficiency of healthy human movement. During the early 1890’s Bess studied sculpture and exposure to Classical Greek sculpture was likely an introduction to human anatomy and she subsequently formed the belief that the ‘Venus de Milo’ represented the ideal female torso. Following this Bess decided to study medicine, her studies started in Paris and were completed in Zurich. Whilst studying medicine she is said to have witnessed an electrical current being used to stimulate muscle activity and concluded that if an electrical current can stimulate a muscle then so can the mind. These two experiences were the foundation for Bess’s health philosophy that could be summarised as; to reach the healthy movement ideals represented in Classical Greek sculpture we must train the body and mind.

Between 1905 and 1924 schools for the Mensendieck System of Functional Exercise were established in Germany, Netherlands, Denmark, Belgium, Switzerland, Holland, France, Czechoslovakia and the United States. In the 1930’s Bess was teaching in the modern dance faculty at New York and Boston University, and in 1937 Yale University began teaching her system. At its peak there were 200 000 students at her schools and while the system was designed for women, it was embraced in athletic, dance and physical education settings too. Classes consisted of callisthenic style exercise performed in a studio furnished with many mirrors and often participants were naked or wearing a bare minimum of clothing; the reason for the mirrors and limited clothing was that participants needed to see the correct recruitment of their muscles. The goal of the Mensendieck system was to harmonise the relationship between the nervous system, bones and muscles. This was done by training the body and mind to work together, resulting in improved breathing, posture and movement.

Bess was concerned with the negative effects the modern world had on women’s health publishing books in English and German language on the topic. In one of her English language titles, “It’s Up to You” (1931) she spoke about the harm women were doing themselves by ‘Wearing abnormally-shaped shoes (p.38)’. However, the biggest concern Bess held for women’s health was the use of the corset, which was a popular piece of clothing at the time; she believed it affected the efficiency of the diaphragm/lungs and weakened back and stomach muscles. Bess also wrote in one of her German titles “Körperkultur des Weibes” (1906) (Body Culture for Women) about exercise for women following childbirth.

The Mensendieck System is still used today in some parts of Europe and there is some scientific literature supporting its efficacy (Haugstad et al. 2006). However as an Exercise Physiologist the idea that a Medical Doctor was using exercise to treat people during the early 1900’s is very exciting. I also wonder if Dr Bess Mensendieck’s work was the beginnings of ‘Women’s Health’ as a Medical discipline.